Summer is coming and so is the next delivery of Mellow Boards. People are already thinking about where they are going to travel with their Mellow. Electric skateboard travel can be risky legally, but thanks to the compact 99Wh battery you will have no problem getting your board on a plane. We recommend keeping the batteries in your carry-on and put the board and Drive in the checked-in luggage. 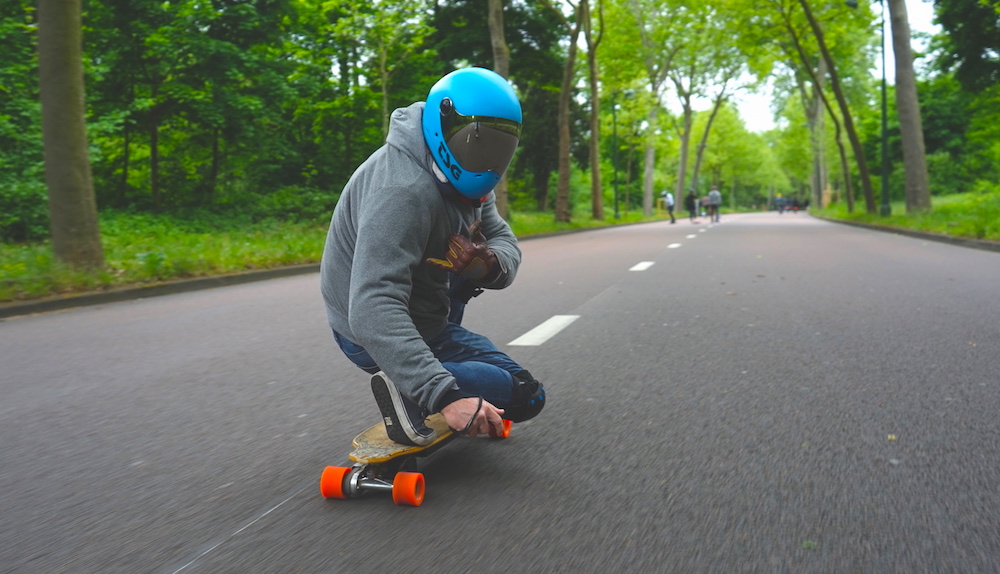 On arrival, you don’t want to just wander around until your battery dies when you could be adventure-boarding and exploring. Ideally you will want to find a place with a path safe from cars, smooth pavement, some sites to see and last but not least, a place you can re-charge.

For our first Electric Skateboard Travel Guide we give you a little orientation around Paris aka “the Big Cheese”. The city is not as bike friendly as, say Oslo or Copenhagen, but the French have always been defenders of cheaper alternative transportation. Parisien bike lanes sometimes are simply a suggestion that you ride on the shoulder going the wrong way on a one-way street. Tourists and cigarette-smoking locals are sometimes unaware of the designated areas for bikes and LEVs (“light electric vehicles” like monowheels and yes you!) so assume no one sees you, and get ready to whistle, honk or meow because they might not be looking.

The laws are vague but most e-skaters of the local core scene at esk8.fr can assure that if you are wearing a helmet and don’t ride dangerously cops won’t bother you. Feel free to hit those guys to find a riding buddy or upcoming group skate at one of the romantic Parisien locations to get rolling on your thunder board.

The Bois de Boulogne is the second largest public park in Paris located along the western edge of the 16th arrondissement. With many paved roads closed to cars it is an amazing place to get some sun and lots of speed on your electric skateboard. The urban greenery will surprise you as it is very dense woods with several lakes and a waterfall; two smaller botanical and landscape gardens with a few sites you might want to visit including the Château de Bagatelle and the Pré-Catelan; a zoo and amusement park. 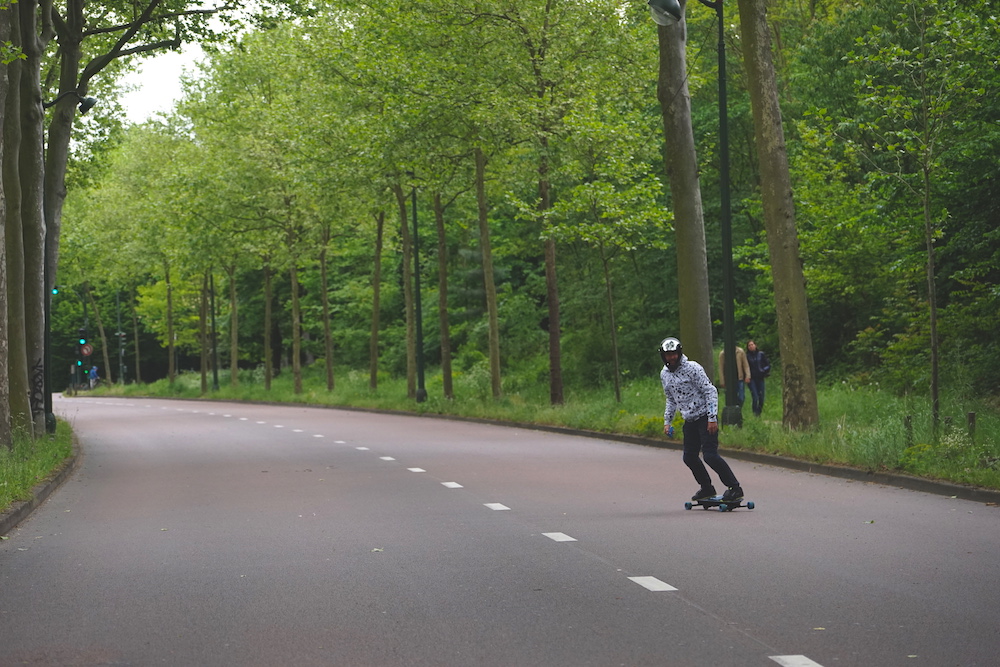 Visit the newly constructed Louis Vitton Foundation to enjoy the latest art collection in between cruises. We haven’t tried it yet, but there is a good chance you can ask to charge your battery at coat check. Another place you can try to charge your battery and enjoy a Michelin star meal is at the Grande Cascade. For the price they are charging to eat, I am sure they can spare a little electricity for your ride home. Just don’t hang around too late in the woods as some freaky things happen after dark.

The best place to view the Eiffel Tower is from the Trocadero. It is a park with trees, a massive fountain, a paved 300m wide path with about 5 percent pitch that is perfect for racing up your board and getting epic postcard shots to send to grandma. On warm evenings you will often find local longboard and e-skate cruise hanging, so don’t be shy, say hi and make some friends. 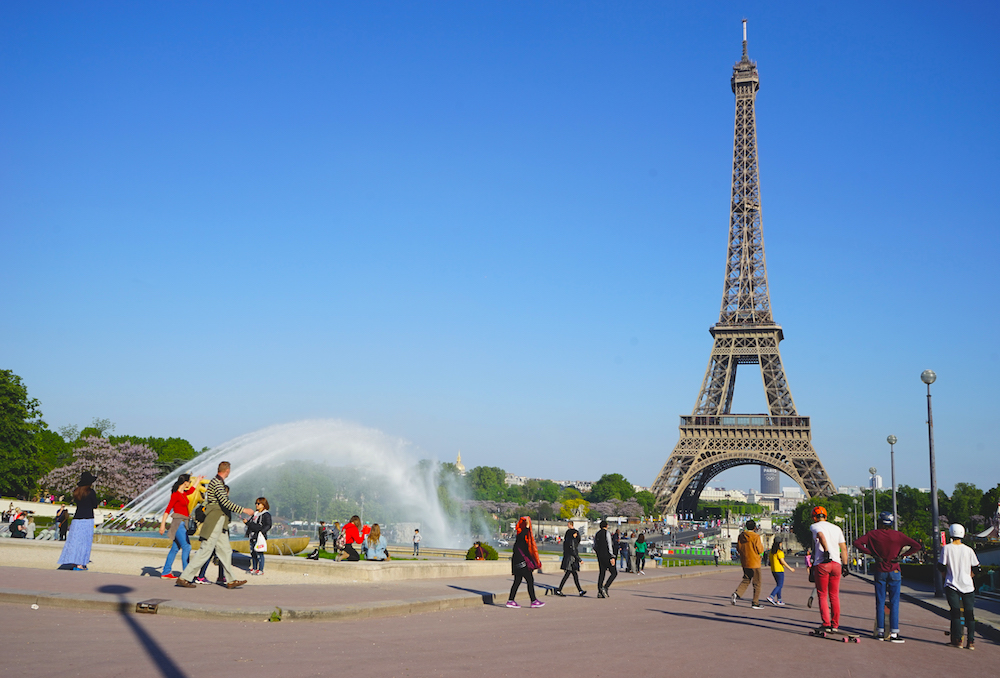 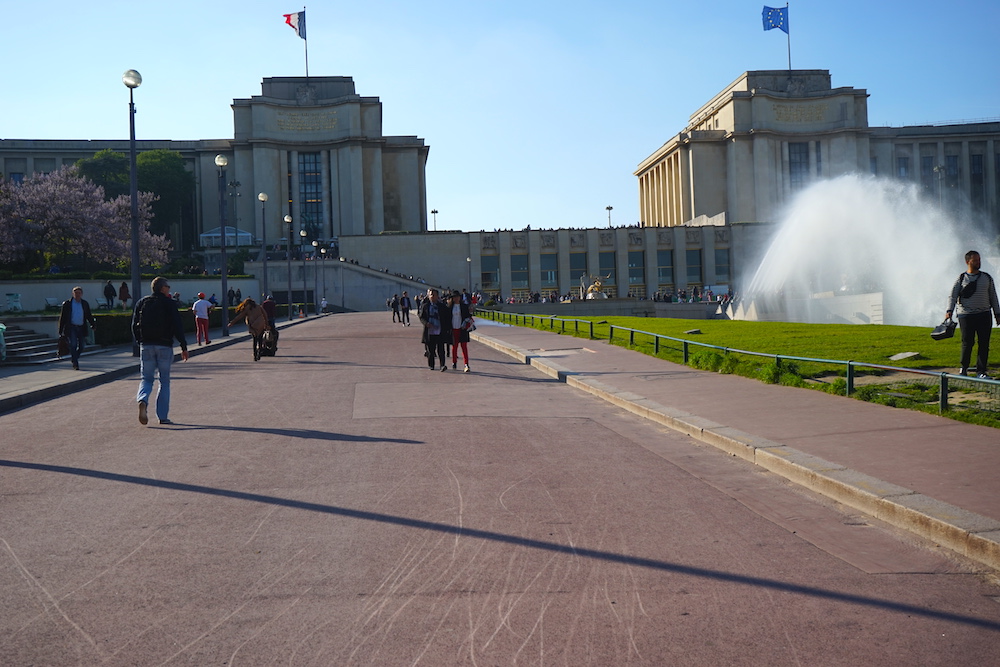 It’s a very central location with many museums and restaurants in the area, including the Homme Museum, Guimet Asian Art Museum or Palais de Tokyo, and it’s a great place to watch local street skaters, enjoy modern art and hopefully get a quick charge. Mellow’s fast charger will fill up your battery in the time it takes to down the Plat du Jour, and a “tasse de café”. If you want to enjoy a guided boat ride there is a stop for the Bateaux Mouches under the Pont D’Iena that will take you wherever you need to go along the Seine river, although we suggest you save your money and skate along the paths and the Parc des Rives de Seine

The recently converted right bank area drew protest from drivers as that meant the roads along the north side of the Seine have been closed to cars and opened to bikers, pedestrians and skaters for a 3.3 km strip that runs through the center of the city, helping you reach many sites without ever entering the “métro” (French for “subway”). Together with the other bank closed to cars about 4 years ago, they make a total of 7 km riverside cruising from the bassin de l’Arsenal à Bastille all the way to the Eiffel Tower linking each other at the Pont des Arts ou Pont des Caroussels. There’s places for pétanque (don’t call it “bocce ball”), little bars, floating restaurants, playgrounds for kids and an exercise circuit. If you want to avoid crowds in the summer go during the week or early in the morning. 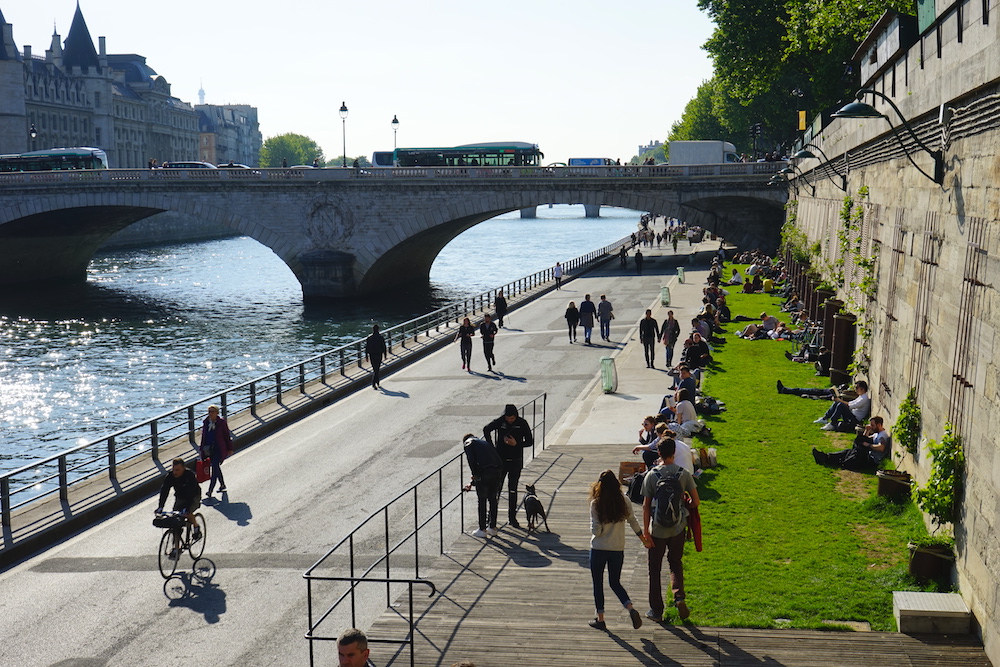 This is the main northern east-west artery which actually runs along Boulevard de Courcelles, Boulevard Clichy, Boulevard de Rochechouart and Boulevard de la Chapelle for about 9 km that help you getting around without wasting time getting lost on old cobble stone roads.

The strip has a protected path and plenty of sites like Sacré-Cœur or the Moulin Rouge on it, with plenty of shops, eventually leading to the Parc de La Villette. This road runs through some nice neighbourhoods (and some less nice ones, ride fast here) but will give a glimpse of the real Paris beyond the Champs Elysees (which we actually don’t recommend you go to e-skate unless you like to navigate through mobs of tourists). 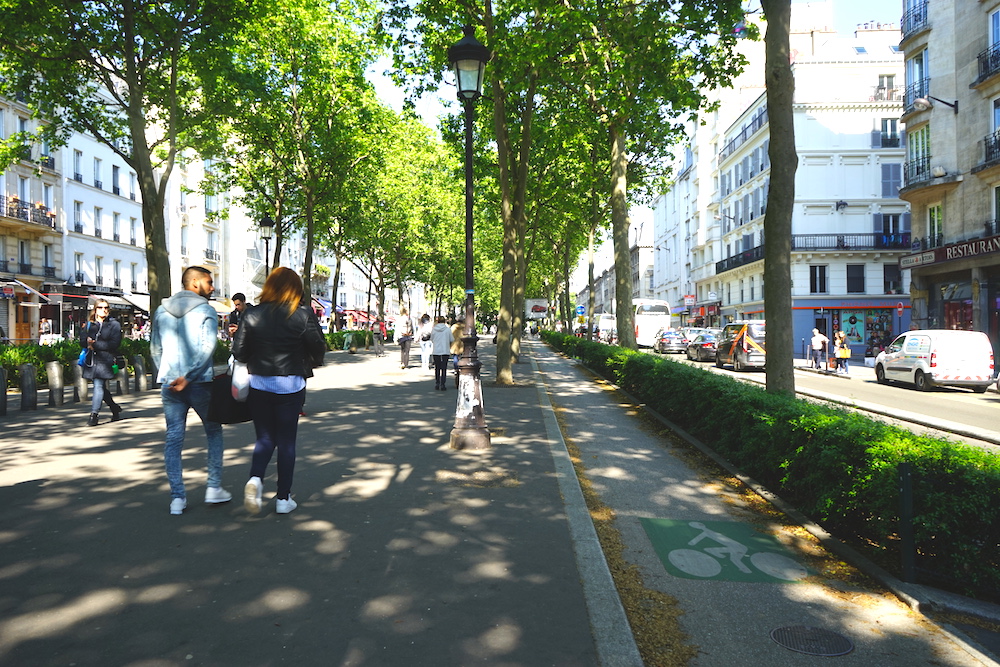 The Park de la Villette is unique complex offering a blend of nature and architecture, leisure and culture. In addition to all the exhibitions, circuses, festivals and children’s workshops offered by the Public du Parc de la Villette, the Cité des Sciences et de l'Industrie, one of Europe’s greatest science museum is here.The place is surrounded by a bike path along the canals that runs far out of the city limits of Paris. 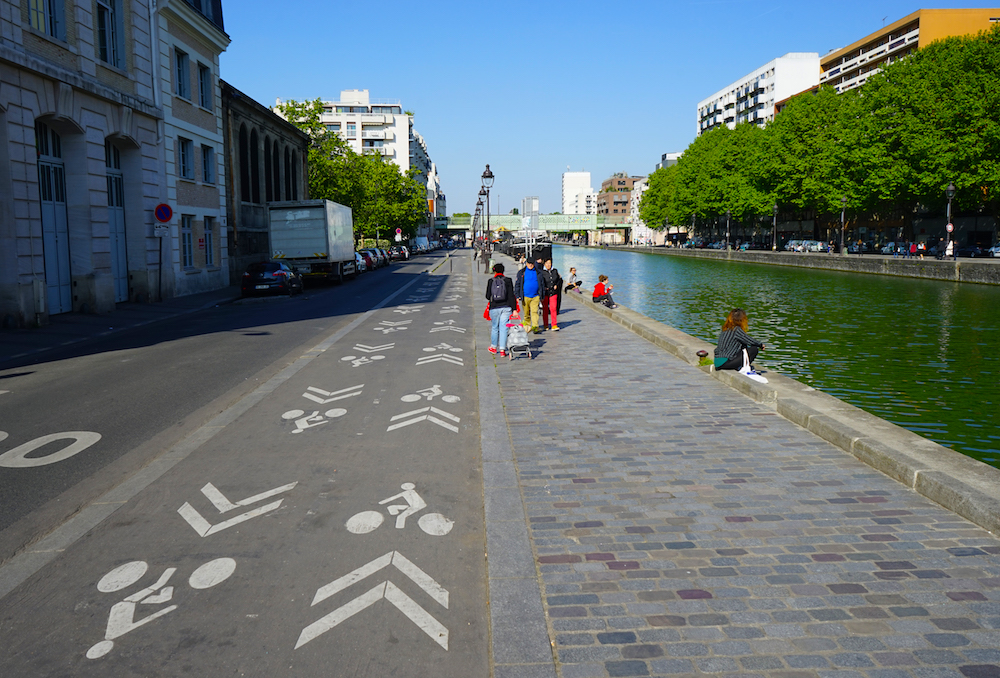 At the Basin there plenty of unique boat restaurants and there is even an electric boat rental Marin D’eau Douce that allows you to cruise the waterways silently and cleanly without a drivers' license in a private boat of up to 11 people. Feel free to ask them to charge your battery while you go out for ride because they are used to it. There are also some cheaper alternatives to get a place to stay here, including a cozy hostel or the Holiday in Express for you to rest after your endless Paris ride. 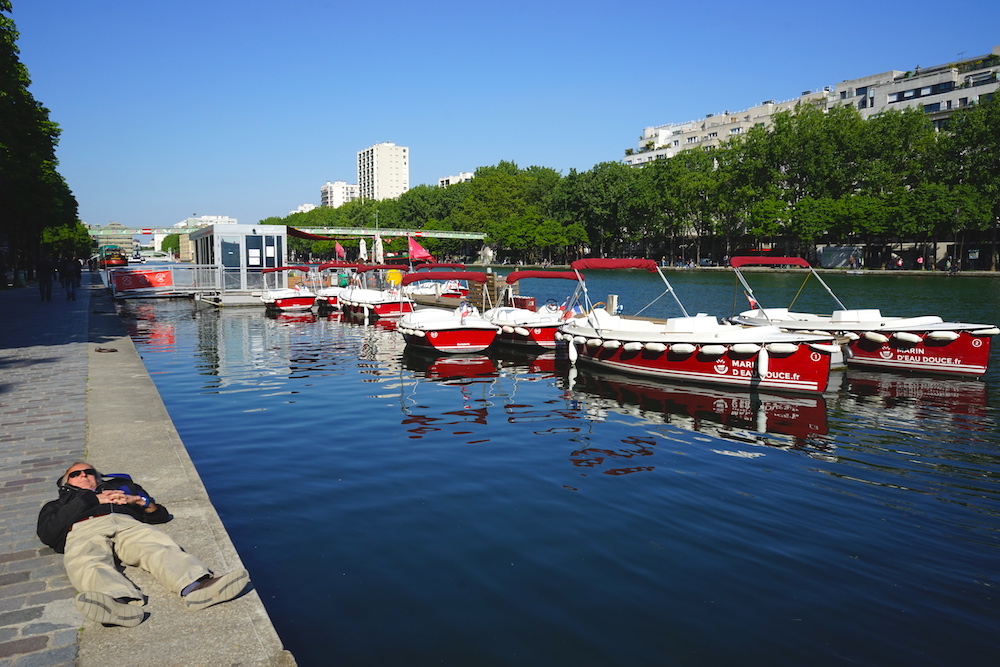 For more E-skate guides and the latest news make sure to sign-up to the Mellow Times.