A week ago the police in Berlin confiscated an electric skateboard and the owner was threatened with possible charges. Reactions on the according Facebook post by the police went through the roof. The majority of the people complained about the police overreacting and not having much more important problems to solve. 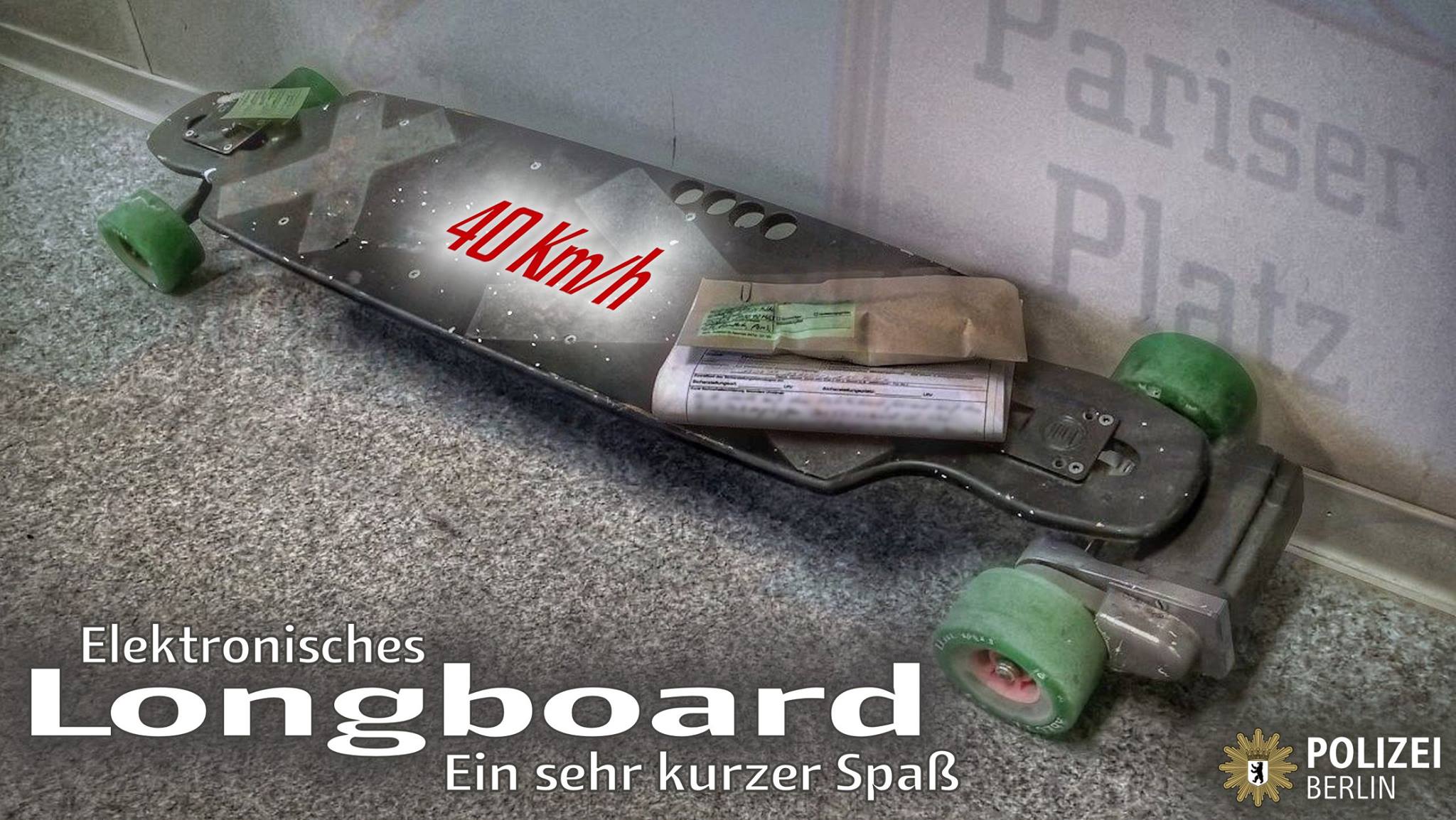 We seized the opportunity to write an open letter to the Federal Minister of Transport and Digital Infrastructure in Germany which we want to share publicly. As the letter is in German, here is the summary of the most important points (Check the legal situation in other contries here):

As the smallest zero-emission vehicle, electric skateboards and other small personal electric vehicles can make a serious contribution to reducing carbon monoxide, hydrocarbons, nitrogen oxides and particle pollution. These vehicles the smallest and most flexible mobility solution, ideally suited for commuting in the city. As a first or last mile solution they can be combined perfectly with the bus, train or plane and thus contribute to a clean future urban mobility.

With the confiscation of the electric skateboard in Berlin on August 13th plus possible further legal prosecution, the police takes a stand against innovations in the e-mobility sector. This incident is absolutely discouraging for all citizens who are open to alternative mobility solutions.

Germany is already lagging behind in the automotive sector and is instead trying to keep combustion engines alive rather than take progressive measures to promote e-mobility. Incidents such as in Berlin are killing innovations in other areas of ​​e-mobility.

As alternative mobility concepts are getting increasingly popular, the EU is calling for regulations. A German petition from April 6th 2016 proposes to expand the regulations for Segways to other personal electric vehicles.

The German government has been working on this topic for quite a while now, currently evaluating evaluating a study to get a market overview.

As a German manufacturer of an electric skateboard drive on automotive standards, we are eager to contribute constructively and accelerate this process, e.g. by providing our specially developed test rig to test and classify safety standards of new mobility solutions or by providing our expertise regarding any questions or suggestions.

Other countries lead the way. In California, there has been a law since October 2015 that allow e-skaters to ride wherever bicycles are allowed in traffic. We are assuming and standing up for similar regulations to be set up in Germany other countries soon.

As long as there is no clear legal and insurance framework, we have to cope with this grey area and we think it’s not appropriate to overreact like the police in Berlin. Instead, we call for more constructiveness and openness to innovation for a future with a variety of sustainable mobility solutions and a better quality of life in our cities!

Download and read full version of open letter in German. 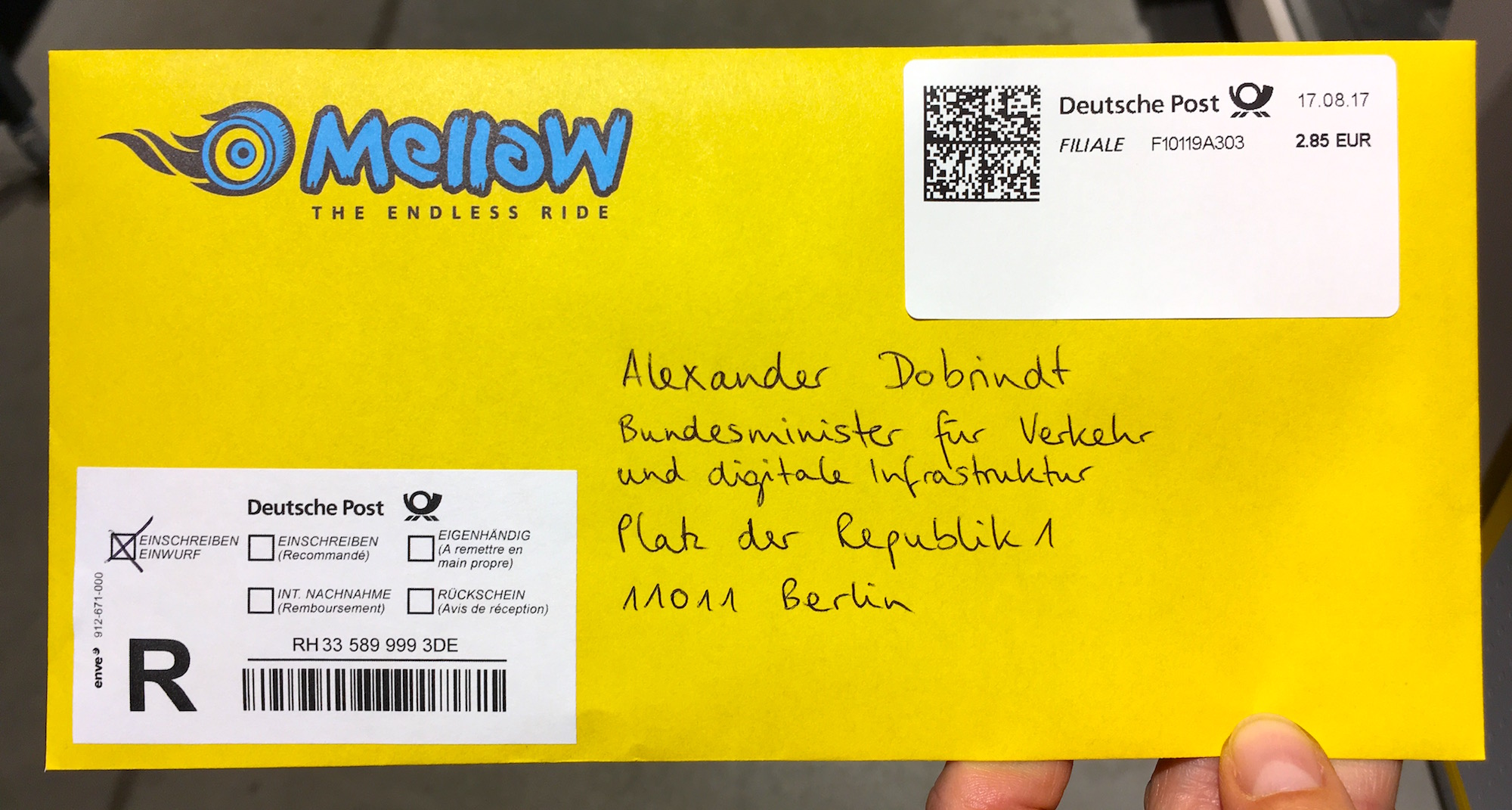 Today we received an answer from the Federal Ministry of Transport explaining the current status and next steps for a legal framework:

The Federal Road Sector Institute (BASt) was asked to provide a market overview of the so-called light electric vehicles and to examine the technical and behavioral requirements that would be necessary to operate them safely on public roads. The final report with the results from the research is available now. It will be published on the BASt website shortly.

In parallel, the Ministry of Transport and Digital Infrastructure is already working on a concept for the approval of light electric vehicles in public road transport. The results of the BASt research are considered as well as the national traffic law and other fundamental considerations. The draft regulation for the approval of light electric vehicles is scheduled for consultation at the beginning of 2018. It will be decided then wether electric skateboards can also be classified as vehicles or, if necessary, as sports and games equipment or special means of transport.

On request of the German green party, the government published details on a law, which can still be expected for this year:

Segways, which have been regulated since 2009, will become part of the new law. The goal is to create a uniform regulation. There is also a working group in the EU, which deals with this topic, but Germany does not take part in it. Why we do not participate in the common solution however is unclear.

The regulation is scheduled to become effective in 2018, but there is no set date, yet. It can no longer be expected for this summer though. If it will apply until the end of the year we can at least expect an exciting season starting in spring 2019!